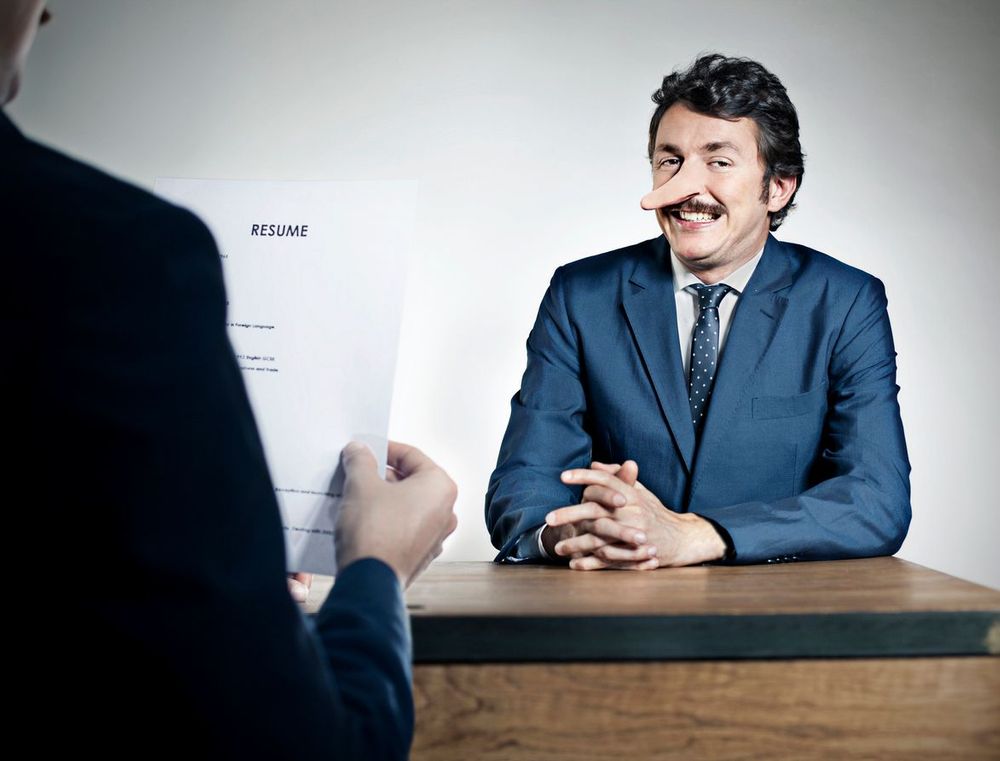 Lying On Your Resume: How You'll Get Caught

We've all been there. One way or another, you've been tempted to change something on your resume to make you seem like a more suitable applicant for the job. It could be something as simple as changing the start date of your employment, or something as significant as including a job position you never really had. As you think about lying on your resume, you probably ask yourself, "Will anyone ever know?" After all, how could a hiring manager find out the truth? Despite what you might think, it's easy to get caught in a lie. Any dishonesty on your resume could prevent you from getting a job offer.

The Prevalence of Lying

People lying or exaggerating on their resume has been going on for years. But recently, it has become even more common. Hiring managers expect candidates to lie on their resumes, so they're on high alert. If they have a small suspicion of deceit, you can be sure that they'll try to catch you in a lie.

You might not think twice about lying because you assume everyone does it. Unfortunately, this isn't a good mentality to have. However you feel about the morality of lying on your resume, you should avoid doing it. Because it's common for people to stretch the truth during the hiring process, honesty is more important than ever. A hiring manager may be quick to make an example of an applicant who lied by not offering them the position. Likewise, they might see your honesty as a highly desirable trait.

Usually, the one reason people lie on their resume is that they don't believe they'll be caught in a lie. But in reality, there are several ways in which your employer can catch you.

Common Resume Lies and How You'll Get Caught

The way in which an employer will catch you in a lie depends on the lie. Here are a few examples of ways a hiring manager might find out about your deceit.

One of the most common lies is regarding the level of education or graduation status. If you say that you graduated from a certain college, the hiring manager could call the school to find out about your educational background. If the manager can't confirm your enrollment or graduation status, they'll catch you in a lie.

While some employers contact the schools directly, others rely on a service to check educational backgrounds. It could even be a third-party that reveals the truth about your education. In any case, the facts are likely to reveal themselves.

2. You Fail at a Skills Test

If you're looking at a job listing and you see a few skills that you don't have, you might be tempted to list them on your resume. Can't you just learn those skills on-the-job? Although you might be able to pick up those skills after an employment offer, the hiring manager won't necessarily trust you. There's a good chance that they will ask you to showcase your skills before offering you a position.

During an interview, the hiring manager could ask you to take a quiz or skills test. If you fail the test, you probably won't receive a job offer. The hiring manager will either think you're lying or that you're incompetent.

As you try to avoid gaps in your resume, you may choose to fudge the dates of your employment. However, it's challenging to keep your dates straight. Job applicants often end up with start and end dates that don't make sense, and hiring managers will look into the discrepancy.

All it takes is a quick phone call for a hiring manager to verify your job history. Instead of lying about your dates, you can include volunteer experiences in between the gap. At the very least, come up with a good explanation for your unemployment period.

4. The Resume and Cover Letter Don't Line Up

If you have a perfect resume but a cover letter that doesn't quite match up with your resume, the hiring manager will hear alarm bells. Discrepancies show that you're lying or that you had someone else craft one of your documents.

As someone straight out of college, you probably didn't get a job as vice president of a company. If your job titles sound outlandish or too good to be true, the interviewer will take a closer look at your history. They might ask you detailed questions about the position or take it so far that they contact your former employer.

Avoid the temptation to lie about a job title. If you had a job title that sounds basic but required advanced skills and training, include that information in the job details. There's no need to be deceitful.

If you don't give much information about a job, qualification, or educational experience, you show that you might be stretching the truth. People tend to be vague when they aren't being completely honest about their resume. On your resume, go into detail about your previous experience. During your interview, avoid being too succinct.

Of course, it's all about balance. If you're too detailed, you don't come across as a great candidate. Over-explaining is also a sign of deceit.

A simple google search is all it takes to find out a lot of information about someone. If you haven't already tried googling your name, now is a good time to do it. You might learn about your college education, employment history, and other details.

A hiring manager could do the same thing. If they search your name and the results don't match up with your resume, you could be in trouble.

When it comes to your resume, honesty is really the best policy. Don't exaggerate or lie about any details on your resume. Rather, come up with other ways to show what makes you such an exceptional candidate. You don't need to lie to stand out.

How Far Back Should Your Resume Go?